Taste and memory are tricky, shape-shifting things. I can’t tell you how many times I’ve had a bottle of wine that I thought was stunningly good, only to drink the same wine at a later point in time and be completely underwhelmed. Of course, wine is a living, natural product that changes and morphs and develops, but there is a reasonable expectation that with any given vintage (assuming proper storage), variations won’t be too drastic from one bottle to the next.

I often wonder how much of a factor external circumstances are to how much food or wine is enjoyed. I believe the experiences tied up with consuming a bottle of wine at a given point in time- company, atmosphere, mood, etc.- can clearly skew one’s perceptions for better or worse. My friend J just got back from a two-week trip to France which he spent touring vineyards and meeting winemakers; I can’t help but think that those wines will taste better to him than someone who didn’t have that experience, because of the positive associations they’ll call to mind. 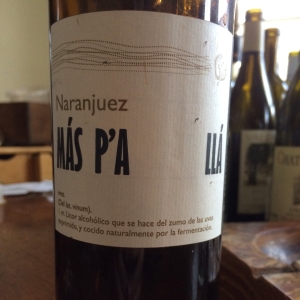 Recently I decided to open up two bottles of wine that I brought back from a trip to Spain, where I was lucky enough to meet the winemaker and tour his winery and vineyards. I remember being really taken with these wines at the time, and the whole story of how we met Antonio made the three bottles we were able to fit in our luggage seem precious. The trip to Spain wasn’t just any old trip though; it was our honeymoon. We had been saving the bottles to open on occasions like anniversaries, which we did for bottle #1. It tasted every bit as good that night as it did in the bar in Granada where we first sipped it, if not better, and we marveled over how great it was and how lucky we were as we enjoyed a beautiful dinner at home.

Sadly, by the time our second anniversary rolled around, things were not so rosy and we weren’t in such a celebratory frame of mind. By the following summer, M and I were separated. What to do with these two remaining bottles, symbols of our failed happiness? I feared they would taste acrid in my mouth. In the first months after our separation part of me wanted to open them at home alone, drinking to get drunk and wallowing in regret and self-pity, but fortunately I suppressed that urge and just kept them in a pantry out of sight.

Recently I’ve been spending a bunch of time with some friends who you could call wine geeks (or wine monkeys, as the case may be). I decided it was about time to drink those bottles; this was partly motivated by wanting to just get rid of them and partly motivated by the desire to share something rare with people who might appreciate it. So, a couple weeks ago I went with P to El Asador, a restaurant in Southwest Detroit known more for its liberal drinks policy- i.e. you can BYOB with no corkage fee- than for the quality of its food (although P will surely argue this). We cracked open the “lesser” of the two wines, the Mas P’Alla, and drank it with a dish that was pretty unsuited (lobster quesadillas) but decided we liked the pairing just fine. I wasn’t as blown away by it as I was with the bottle M and I had drunk on our anniversary- I may have actually sat on it a little too long- but it was solid, and besides, it didn’t really matter because the company was good. We took part of the bottle with us to finish later and liked it even better than at dinner (byproduct of a pleasant evening or vice-versa?). One down, one to go. 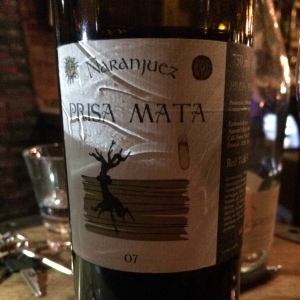 A week or so later I was sitting at home scrolling through my Instagram feed and saw that someone had hashtagged a photo of Dom Perignon with #OTBN, which upon investigation I discovered stands for “open that bottle night”… It was just the excuse I needed to open the remaining bottle, the ’07 Prisa Mata. I texted J, who was at his coffee/ wine bar, and offered to bring a bottle down to share. When I somewhat sardonically referred to it as “honeymoon wine”, he texted back, “It has no power over you except for the alcohol. Bring it.” I can always count on J for an astute observation. I was finally to the point where that was true, and was glad others could see that. The bottle had lost its totem status, and we drank it with no specter of sadness whatsoever; in fact, I was even pleasantly nostalgic as I told J the story of meeting Antonio. The wine was multi-layered and powerful; drinking it made me feel good about where my life is now, and good about forging new memories. My one small regret is that we didn’t enjoy the wine with some food, because I think it would have been even better. But I’m so glad I got to share it with someone who gets it, in so many ways.

I saved a couple small glasses’ worth to bring to P the next day, but the magic had dissipated, at least for me. I had thought the wine had enough structure and tannins to hold up overnight, but it just ended up tasting flat and one-dimensional to me. P claimed to like it, but perhaps he was just being polite. I have this feeling that whenever I count on wine to be good- like, when I specifically want to impress someone with it- it always falls short, but when I just open something with no expectations I’m often pleasantly surprised. (Obvious extrapolated moral being, the fewer expectations you have, the happier you’ll be and the more you’ll expose yourself to being taken aback by life’s small offerings of wonderment.) Anyway, it was a curious experiment to drink these wines in such different circumstances than I had initially imagined, but circumstances that were no less meaningful or beautiful in their own ways.

I did some writing today. It’s a departure from my usual type of posts. Just some stuff I’ve been thinking on lately. 🔗 in profile. #radicalhonesty #radicalacceptance
There’s a story here... I wish I had time to write it.
New post: Hot Springs Eternal (link in profile)
Kissy kissy mwah mwah 💋 💋 #cocktailculture #theoakland #oldladyselfie
Hey friends. I'm rekindling my blog, and in an effort to add a layer of separation between my public/ business internet presence, I'm starting this slightly more anonymous feed. Feel free to follow along. 💛
Loading Comments...
%d bloggers like this: